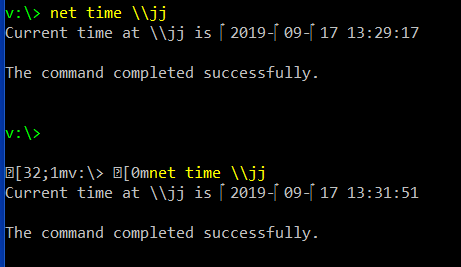 echo %@ascii[
... then highlight the string in question, copy and paste it in, type your closing bracket, and hit Enter.
Toggle signature
Charles Dye

Standalone TCC or TCMD? Unicode output turned on or not? Which OS? What does 'which net' tell you is getting executed?

Output from net time looks perfectly normal here on both Windows 8.1 (with v20 of TCMD) and Windows 10 (with v25) in either TCMD or TCC.
Toggle signature
Cheers, Steve

Here's a better look at it.

(I copied the text from the console into my editor (TextPad, which I believe Vince also uses) and examined it there.)

The only obvious difference between your environment and one of mine was the Windows 10 version (I upgraded from Windows 7 a couple of days ago and the update cycle had only got to 1803 by yesterday evening, whilst 1903 was installed last night) and since the 1903 update I see the same output but only in some contexts?!

When run in TCC running under Take Command (with Unicode output off) I see the output unsullied (although I do see a strange artefact on the right hand end of the output line - three white squares, where my background colour is black). Running in a standalone TCC (with Unicode off and Raster font) I see a question mark whereas with (say) Consolas I see the right facing arrow but with some other fonts I see an empty square or a small dot (presumably representing the fact that there isn't a character in that position in the font). Both Powershell and CMD show the same, depending on font.

Yes. I also discovered what it was (and neglected to push "Post reply"). And, as you said, Steve, it depends on the font. Other fonts give a more typical representation of an "unprintable" character. The programmer can choose a default character when converting Unicode to Ascii (which may be happening). That one is an odd choice. And what's an extra character doing there in the first place?

What is the character that You use use date separator?
If You use date/time commands, what do You see?
And if You use net time/date/time from cmd?

In ansi escapes, that would be the escape-character 0x1B or something.

I would check the Locale settings, to see if anything amiss is there.
You must log in or register to reply here.

@INT with comma as decimal character

M
I'm unable to use @replace[] with a % character in string2

V17 beta, debugger: STRG-S is inserting character instead of saving

@SUBST ... how replace character with a caret?

M
Programmatically getting the console width in character

J
How to pass a character like " " to a function

B
A swedish character sent through keystack gets converted