You are using an out of date browser. It may not display this or other websites correctly.
You should upgrade or use an alternative browser.
R

I have a program I've been using for years that writes various data using SCREEN, basically record number, name, account number dollar amount, then the next record on a new line.

Two days ago the window's vertical scroll bar disappeared and I can't scroll back with the mouse either. I didn't change of that code. Any ideas what might be causing it? I assume it has something to do with a scroll buffer. The program is started by double-clicking in Windows and just before ending it deliberately waits for the user to type DONE. Historically, I've been able to scroll even though it was waiting.

It's running under TCC 22 and Windows 7 Pro.

(The program is 100 pages of code, so obviously I can't list it here. And, yes, I do realize TCC isn't intended for application development, but using it isn't my choice.)

Is this in a Take Command tab, or in a standalone console window?
Toggle signature
Charles Dye
R

The program runs by double-clicking in Windows Explorer and not from either a tab or a command line.

The scroll bar used to appear immediately, while the records were being processed and written to the screen.

"DONE" is at the very end of the program, so it's not a factor. After the stuff is written to the screen various files are deleted, a file containing each account record is backed up, etc., and then it goes to an INPUT statement and waits for the user. That just keeps the program from closing on its own (so the user can scroll back through the screen if necessary ....)

A line is read from a text file and parsed into variables (no array), then some variables are massaged, a record is created as a variable and written to a file (using echo whatever>>%outfile), then some of the parsed/massaged variables are written to the screen, and it loops back for the next record.

The screen-writing code is as follows. USE_COLOR_ are aliases. USE_COLOR_ERROR simply means "bright red on bright white"--it has nothing to do with whether there is an error.


I'm assuming the problem has something to do with the scroll buffer. I did have a line CLS/S, which I deleted in the process of trying to resolve this.

I gather that when you start it from Explorer, TCC (not TCMD) starts. ... right?

Rick Reinckens said:
I'm assuming the problem has something to do with the scroll buffer.
Click to expand...

That sounds like a reasonable assumption to me. Suggest you open up the console properties (Alt-space, P) and check that the screen buffer height is larger than the window height. 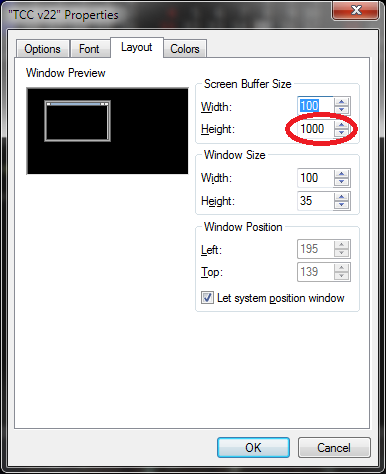 Thanks! That solved it. Somehow it got changed to 25. I did open another window and that showed 335, but I'm running the actual program right now and that window was 25. I changed it to 1000 and the scroll bar is back.
You must log in or register to reply here.

No vertical scroll bars in the help

S
WAD HELP does not scroll with mousewheel

How to? command echo in title line/bar

M
Bug in Windows 10, when adding symbol to task bar

TC 11 - can the tabs on the button bar be switched off?