Fixed Problem with use of Batch parameters in the IDE

You are using an out of date browser. It may not display this or other websites correctly.
You should upgrade or use an alternative browser.
T

Day 3 of the evaluation - still debugging the debugger - and YAB !!!

I have found some problems with the IDE operation when trying to pass command line parameters to the batch file.

I can't find any doco on how to use the "Display/Modify Batch Parameters" so the following may all be a result of my failure to use it correctly.
By experimentation, it appears that this is a "free text" edit control that allows any entry regardless of correctness.
I am currently using it as 1 line per batch parameter based on the current behaviour of the IDE I have observed and will report in "First BUG" further down in this post.
Each line consists of a commandline parameter position number (for %n) and its intended value
e.g. 1=380
2="sn0209ar.dsk"
-------------------------------------------
The First "BUG":-
When the batch file is started, the IDE replaces the entered batch parameters with something out of it's memory of a previous commandline
See screen shot "IDE - batch parameters BEFORE pressing [Run].jpg" 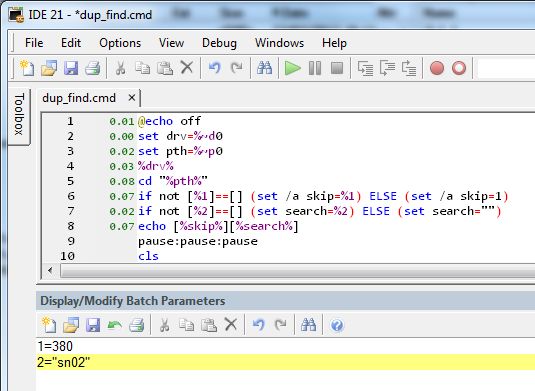 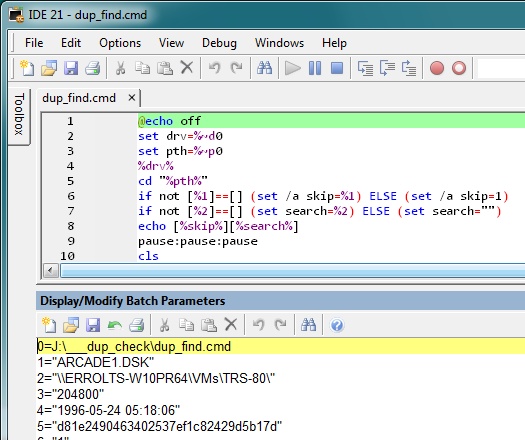 here is the screen shot when stepped to line 8 "IDE - Modified and Watch lists AFTER running to line 8.jpg" 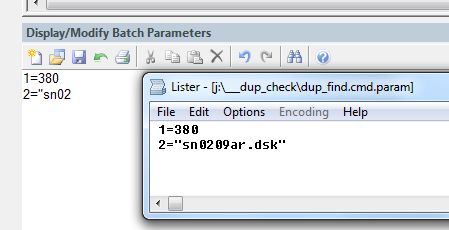 At the moment, this doesn't matter because the First BUG noted above replaces the content of this list before the batch runs.

The batch arguments are set either by:

1) if you use BDEBUGGER, it uses the remaining command line (i.e., "bdebugger batchname arg1 arg2 arg3")
2) If you start the IDE or BDEBUGGER without any arguments, you enter the batch arguments in the edit control on the toolbar. (You can also do this between debugging runs if you want to change the original arguments.)
3) (Not recommended) you can also modify the batch args in the Batch Parameters window, but they will be lost / overwritten when you stop debugging.

The Third "BUG":-
If you use the "Save" function on the Batch Parameters list, it saves the current content of the list as a unicode text file. Obviously this is not the bug, but may be the cause of it.
When you use the "Open" function to reload the list, the previously saved list is truncated
See screen shot "IDE - batch parameters after loading from previous save.jpg"
Click to expand...

S
How to? Batch file problem

K
Problem With SCRPUT /u