You are using an out of date browser. It may not display this or other websites correctly.
You should upgrade or use an alternative browser.
K

I am having a problem with inconsistent behaviour with SCRPUT /u. For example, using the following batch file (the problem isn't restricted to this batch file; it happens in others, and at the command prompt as well):

I get the expected output for the first nine times (always nine time) I run it, as follows:

After nine runs, the output becomes erratic with random numbers of blank lines between the SCRPUT'ed lines. The final output - "Input folder", etc - was 15 (!) blank screens further down, but sometimes the amount of space between is different. 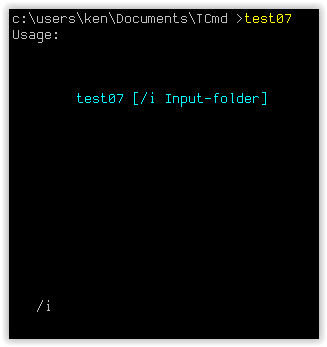 After two (always two) runs like that, the /u parameter no longer seems to have any effect:, and on all subsequent runs the cursor doesn't move with the result that additional output on a given line overwrites the first output: 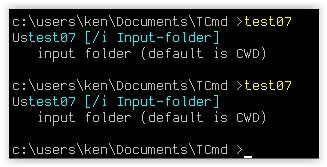 I am using version 24.02.46 under Windows 10. The same results happen in both TCC and the tabbed interface. Nothing about the batch file or system changes in between different runs. Restarting Take Command (or TCC) results in the batch file working correctly the first nine times, then getting output with blank lines between SCRPUTs, then the /u parameter being ignored.

The /u parameter is a great addition to SCRPUT and makes it far more useful, thank you for that. I would appreciate if you could investigate the issue.

On both OSs, I can see the behavior that Ken described. It's not necessarily on the 10th try. It is precisely when the console begins to scroll.
Toggle signature
--
- Vince - Win10Pro/64/2009/21H2
K

Update 49 fixed the issue for me. Thank you.
You must log in or register to reply here.

T
Fixed Problem with use of Batch parameters in the IDE